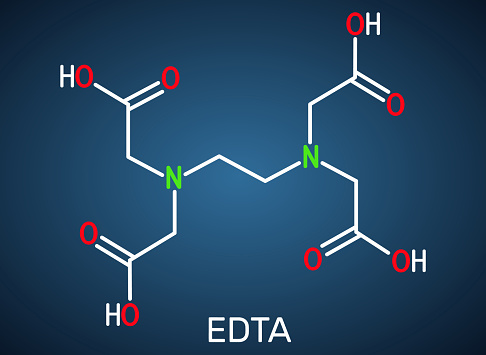 EDTA is a prescription medicine, given by injection into the vein (intravenously) or into the muscle (intramuscularly).

Intravenous EDTA is used to treat lead poisoning and brain damage caused by lead poisoning; to see how well therapy for suspected lead poisoning is working; to treat poisonings by radioactive materials such as plutonium, thorium, uranium, and strontium; for removing copper in patients with a genetic disease called Wilson's disease; and for reducing levels of calcium in people whose levels are too high.

EDTA is used in the muscle for lead poisoning and related brain damage.

EDTA is sometimes used as an ointment for skin irritations produced by metals such as chromium, nickel, and copper.

Eye drops containing EDTA are used to treat calcium deposits in the eye.

In foods, EDTA bound to iron is used to “fortify” grain-based products such as breakfast cereals and cereal bars. EDTA is also used to help preserve food; and to promote the color, texture, and flavor of food.