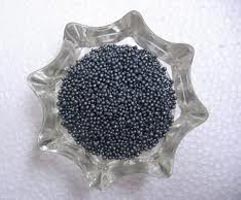 Request to Call Send Enquiry
We are offering iodine.

iodine
iodine is a non-metallic, dark-graypurple-black, lustrous, solid element. Iodine is the most electropositive halogen and the least reactive of the halogens even if it can still form compounds with many elements. Iodine sublime easily on heating to give a purple vapour. Iodine dissolves in some solvents, such as carbon tetrachloride and it is only slightly soluble in water.
Applications
iodine is used in medical treatment as tincture and iodioform, it is employed in the preparation of certain drugs and in the manufacture of some printing inks and dyes. Silver iodine is used in photography. Iodine is added to almost all the table salt and is used as a supplement to animal feed. It is also an ingredient of water purification tablets that are used for drinking water preparation.
For many of these uses iodine is turned into iodides.
Iodine in the environment
iodine is added to nearly any kind of salt that is applied. It is an ingredient of bread, sea fish and oceanic plants. Iodine is naturally present in the ocean and some sea fish and water plants will store it in their tissues.
Iodine can be found naturally in air, water and soil. The most important sources of natural iodine are the oceans. About 400.000 tonnes of iodine escape from the oceans every year as iodide in sea spray or as iodide, hydrichloric acid and methyl iodide, produced by marine organisms. Much of it is deposited on land where it may become part of the biocycle.
There are some iodine-containing minerals, such as alutarite, found in chile and iodargyte, found in colorado, nevada and new mexico. World-wide industrial production of iodine is about 13.000 tonnes per year, mainly in chile and japan, plus small amounts in russia and usa. Iodine is extracted from natural brines and oil brines, which have up to 100 ppm of the element or form chilean nitrate deposits. Known reserves of easily accessible iodine amount is around 2 million tonnes.
Health effects of iodine
many medicines and cleansers for skin wounds contain iodine.

iodine is a building material of thyroid hormones that are essential for growth, the nervous system and the metabolism. Humans that eat little to no bread can experience iodine shortages. The function of the thyroid gland will than slow down and the thyroid gland will start swelling up. This phenomenon is called struma. This condition is rare now as table salt is dosed with a little iodide. Large quantities of iodine can be dangerous because the thyroid gland will labour too hastily. This affects the entire body; it causes disturbed heartbeats and loss of weight.
Read More...